Just take a moment to consider the title, caramelised white chocolate… White chocolate that has been caramelised. Caramelising stuff has the extraordinary ability to make anything taste at least 100 times better than normal so as soon as you put some good quality (*cough* Green&Blacks *cough*) white chocolate through the process the result is actually magical.

I thought this was fitting for the festive period. It’s light enough to eat after a heavy dinner but indulgent enough to satisfy your high expectations for Christmas food.

I used Greek yoghurt in the cheesecake to make it a bit lighter and higher in protein but you can use sour cream. I got the caramelised white chocolate idea from a couple of blogs quite a while ago but I was waiting for the perfect time to try it out. Yeah, no hesitation necessary. This stuff is AMAZING. It’s pretty time consuming but you could definitely consider yourself an alchemist after trying it because it’s pretty outside the box.

My mind has already gone a bit crazy thinking about all the stuff I could do with it… Cakes, cookies, doughnuts, the possibilities are endless and I actually can’t wait.

Ok anyway, back to the cheesecake. My mum is actually Cheesecake Queen in our family so I sought her advice throughout the process – she is basically Wikipedia. Make the base first. I used whatever biscuits I had in the pantry at the time but if you need some direction then digestives or chocolate biscuits work great. I actually used some of the left over chocolate gingerbread from my Gingerbread House.

Pre-heat the oven to 150°FAN. Line a 20cm springform tin with baking parchment, base and sides. Crush the biscuits in a bag with a rolling pin (or shove them in a food processor) until they reach the consistency of coarse sand. Mix in the melted butter and sugar and press in to the prepared tin. Bake the cheesecake base in the oven for 10-15 minutes. Leave the base to cool in the tin on a wire rack while you get on with everything else.

For the Caramelised White Chocolate:

Reduce your oven temperature to 110°FAN. Chop the chocolate in to small chunks and lay on the bottom of a baking dish or tray. Put in the oven on the middle shelf for 10 minutes. Take the chocolate out and give it a good stir with a clean and dry spatula or spoon. Put it back in the oven for another 30-60 minutes and check on it every 10 minutes, stirring each time. It goes a bit weird and chalky during the process but it always melts up again when you stir it. Keep baking until it turns a golden brown colour. Mine took about 50 minutes.

Set it aside to cool slightly.

Turn the oven up again to 150°FAN. Using a mixer, beat the cream cheese and vanilla bean seeds until smooth. Mix the caramelised white chocolate with the crème fraiche and add it to the cream cheese along with the Greek yoghurt. Mix on medium speed until combined. Add the eggs one at a time mixing on low speed. Don’t over mix the mixture. 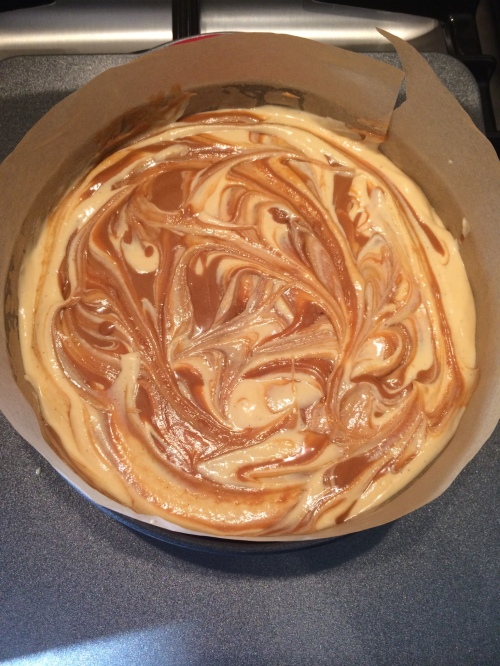 Pour on top of the base and place on a baking tray in the oven. I thought this mixture needed a little something extra so before I placed it in the oven I melted three tablespoons of smooth caramelised biscuit spread in the microwave and swirled it in to the top of the cheesecake. Add some water to a roasting tray and place it in the bottom of the oven to create steam.

Let the cheesecake bake for about an hour and then turn the oven off and let it cool inside with oven door slightly ajar.

Recipe adapted from here. Special thanks to my mum for being such an expert.