So I’ve been playing around with this thought in my head for a while now, and I thought now was as good a time as any to give it a shot. I knew what I wanted: a simple chocolate cupcake with vanilla frosting and a swirl of nutella with one of those tiny breadsticks in. But (there’s always a but) for some reason or another I decided to use a different chocolate cupcake recipe to my usual failsafe recipe and the Primrose Bakery Cookbook was sat on my kitchen counter staring at me. Part of me decided to go with a new recipe out of guilt, I’ve had this book for months and haven’t made a single thing out of it yet. Low and behold I found myself flicking through looking for the chocolate cupcake recipe. Let’s just say I looked at it and groaned. It was unnecessarily complicated. I had all of the ingredients so I made a start anyway despite how unappealing and convoluted the process looked. Complaining aside, they were super light and fluffy and everyone liked them so here’s the recipe anyway.

Preheat the oven to 180° FAN and line muffin tins with cupcake cases. Chop the dark chocolate finely and put it in a microwave safe bowl, melt the chocolate in intervals stirring each time to prevent burning. Let this cool while you get on with everything else.

In a bowl, cream the butter and sugar until paler in colour and fluffy. Add the egg yolks and beat well. Next, add the melted chocolate and beat well.

Sift the flour, baking powder, bicarb and salt in a separate bowl (many bowls were used in the making of these cupcakes) and stir to combine. Measure the milk out in a jug and add the vanilla extract. Gradually add alternate amounts of the flour mixture and milk to the chocolate mixture until both are used up fully. Keep mixing well after each addition making sure to scrape down the sides of the bowl with a spatula.

In a clean bowl (glass or metal) and using a clean whisk, beat the egg whites until they reach the stiff peak stage. Then, using a spatula, carefully fold the egg whites in to the main batter until fully combined.

Spoon the mixture in to the cases, filling them about 2/3 full (take extra care not to over-fill) and bake for 20-22 minutes, or until a skewer inserted in to the centre of the cake comes out clean.

While these were in the oven, I couldn’t help myself from peeking through the oven door glass and seeing what on earth was going on. They rose a lot. And I mean really ROSE. I wasn’t that impressed until they came out of the oven, miraculously normal sized. Despite my doubts, I let them cool on a wire rack while I made a batch of vanilla american frosting. You can find that recipe here.

I had two piping bags at the ready, one filled with vanilla frosting and one filled with nutella. Then I decided to make life a little harder for myself and fill the middle of the cupcakes with Nutella. Coring cupcakes is fun. And you don’t need any fancy tools, just a small serrated knife. Cut a small hole from the top of the cupcake and fill the cavity with a teaspoon of nutella, then place the top of the cupcake back on and frost away. Top your vanilla frosting with a swirl of nutella and stick a breadstick in to it. 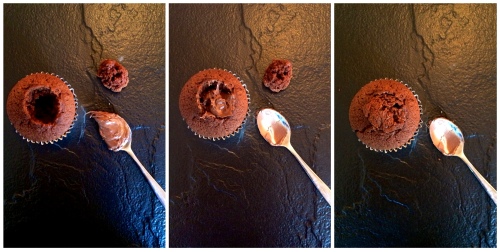 So there you have it. Surprisingly light, undeniably chocolatey and sufficiently messy Nutella&Go! Cupcakes. 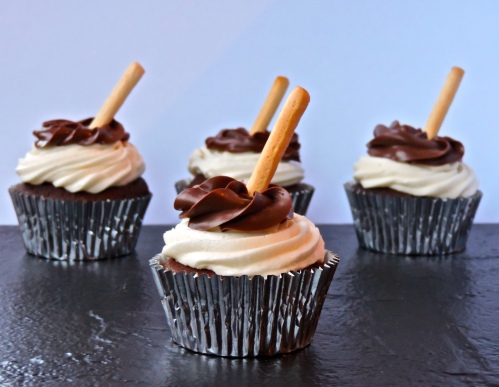